Exhibition of paintings in the Palazzo Belfiore, Florence Italy.

April 2012:
The Written Word. Exhibition in the Biblioteque American, 75007 Paris.

October 09: Reflections of Ourselves

September 2009, "A Book about Death"
New York: The The Emily Harvey Foundation Gallery on Broadway.
A celebration of Emily Harvey and a global exploration of Death.

The Goal Ball - June 6th 2009
Hotel Concorde LaFayette, 75017 Paris. An exhibition of paintings in aid of the charity Goal.

October 28th 2008: Grande Marché d'Art Contemporain.
Bastile, Paris. You will find my work In the new artists section.You can see some of the pieces which will be on show here
June to July 08: Nutshuis, the Hague, the Netherlands, 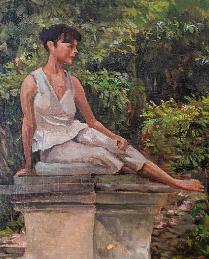